Celeb Fitspo - Which Celebrities Inspire Our Workouts the Most? 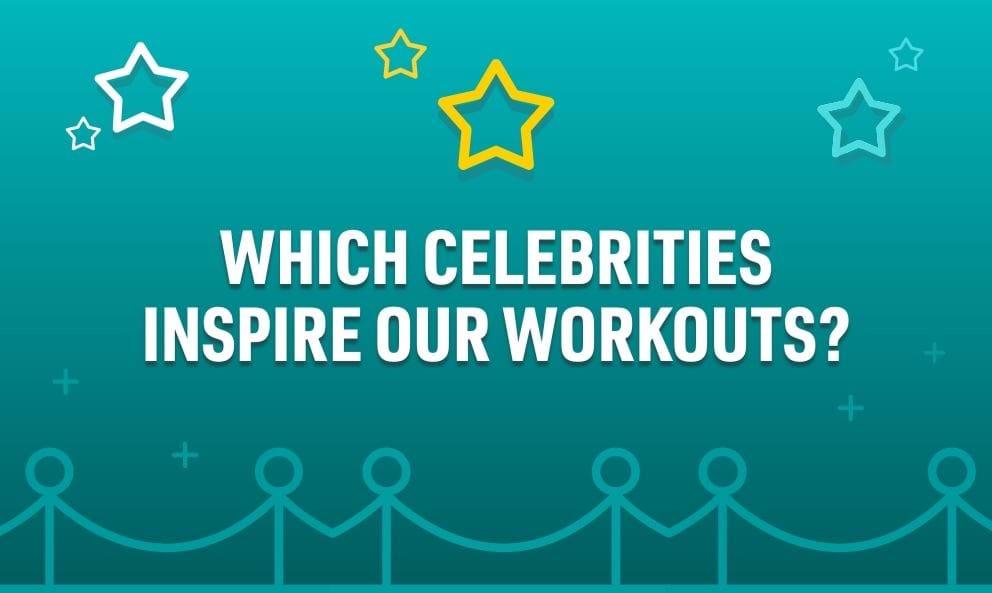 Love them or hate them, celebrities are often seen as role models, and this is especially true when it comes to fitness. For as long as we can remember, people have turned to the TV, glossy mags, and more recently, social media, for fitness inspiration from their favourite celebs.

And with many celebrities and influencers share their workout routines online, or in magazine features, those looking for fitness inspiration will typically find it.

Back in 2020 we investigated which celebrities were inspiring our workouts, and this year we’ve taken it a step further. As well as analysing over 1,000 search terms to find out which celebrities give us the most motivation, we’ve looked at which exact parts of their bodies we’re striving to emulate when planning our gym sessions.

With over 12,360 searches each month for his workout style, and landing in the top 10 for his arms, abs, legs, and chest, Marvel actor Chris Hemsworth comes in as the most inspiring celebrity when it comes to fitness. While this is in doubt in part thanks to his reputation for building a Thor-worthy physique, the actor also regularly shares fitness updates from himself and PT Luke Zocchi which inspires many.

No celebrity fitness inspiration could be complete without mention of The Rock (Dwayne Johnson). The wrestler turned actor, is well known for getting into serious shape for many of his most famous movies, came in second, with 12,270 searches a month for his workouts and exercise plans.

And of course, it’s no surprise that the legendary Henry Cavill who’s previously held the role of Superman also found himself in the top three, with over 10,000 searches a month by those of us looking to replicate the workout style that transformed him into a bona fide superhero.

Interestingly, out of the top 10 male celebrities that we look to for fitness inspiration, only one is a sports star - the NFL American Football player Aaron Donald, who pulls in 4,400 searches a month for terms related to his workouts.

The rest of the top 10 is made up of actors of all shapes and sizes, many of whom have played superheroes in either the Marvel or DC comic universes, from Henry Cavill’s Superman to Chris Evans’ Captain America. With many of the actors required to build impressive physiques as part of their roles, it’s perhaps unsurprising that they  have ended up providing endless fitness inspiration to the masses.

While the male top 10 is mostly made up of actors, when it comes to the female celebrities we most look to for fitness inspiration, it’s a combination of influencers, actresses, models, and musicians. Kendall Jenner, model and socialite, lands herself in first place - garnering an impressive 8,420 searches each month for terms associated with her workouts.

In second place is Kim Kardashian, the elder half-sister of Kendall Jenner and enormously popular socialite turned entrepreneur. Kim is no stranger to a bikini selfie, and it’s clear she has left her fans seeking inspiration and workout tips from both her and her personal trainer.

Completing the top three female celebrities giving us the most fitness inspiration is Brie Larson, yet another entry to the rankings from the Marvel Superhero universe. Her Captain Marvel workout has been extensively documented and tried and tested, and has been referred to as one of the most gruelling celeb training regimes of all time. Despite this challenging reputation, there are over 3,000 searches for her workouts every month, pinning her as one of our biggest celeb fitness inspirations.

Jennifer Lopez topped the charts as the most inspirational musical figure in the rankings, no surprise given how fans have envied her shape for decades, and iconic model Bella Hadid also featured in eighth place. Four of the top 10 female celebrities inspiring our fitness regimes were from the Kardashian clan, with both Khloe Kardashian and Kylie Jenner joining their sisters Kendall and Kim in the rankings.

The Celebrities That Inspire Our Arm Workouts The Most

Whether it’s to help lift heavier weights, bulk up our biceps,  or just sculpt and tone - arms are one of the first places many of us choose to hit when developing our workout goals, and there’s no shortage of celebs out there to provide inspiration.

Crowd favourite Chris Hemsworth once again came out on top, with over 5,000 searches a month from those wanting to replicate his for his arms specifically.

Following behind and closing out the top three are the Rock and Arnold Schwarzenegger, the latter of whom has admitted that his arm workouts historically take up to a full two hours each!

It’s not just bulky, muscular arms we’re searching for though, the top ten is also littered with searches for arm workouts for the likes of heartthrob musician Harry Styles, the Kardashians once again and even Taylor Swift - who pulls in more than 300 searches a month for her toned biceps.

The Celebrities That Inspire Our Ab Workouts The Most

Dwayne Johnson, otherwise known as the Rock, dominates the leader board when it comes to who’s ab workouts we’re most inspired by - garnering an enormous 22,000 searches a month for his abs - the highest number of searches in the whole study. If you want to replicate his Hercules-esque abs, he’s even provided the exact workout he used for the movie, but be warned - it’s not for beginners!

Chris Evans follows behind, with 5,400 searches each month for his transformation into Captain America - complete with enviable set of abs.

Taking further cues from the movie world is Ryan Reynolds in third place, with 4,400 searches for his ab workout. This time it was Deadpool that provided inspiration to the movie watchers to get in the gym in the hopes of gaining a set of abs that mimic his.

Unlike the overall rankings for celeb fitness inspiration, the top 10 most searched for celebrity ab workouts include more than mainly actors, with footballer Cristiano Ronaldo in seventh and singers Justin Bieber and Harry Styles in eighth and ninth, respectively.

The Celebrities That Inspire Our Leg Workouts The Most

When it comes to the lower half of the body - the top 10 is dominated by the ladies. Singers Carrie Underwood and Taylor Swift take joint first position for leg workout inspiration with 14,800 searches every month. Both women’s workouts have been documented extensively online, with Taylor publicly a long-time fan of the Body by Simone method - which fans have taken to time and time again, in order to achieve legs like their idol.

Chris Hemsworth once again makes the top ten, with his legs pulling in over 8,000 searches a month, while the rest of the top 10 is filled with the likes of musicians Ariana Grande and Britney Spears, alongside actress Emma Watson and even the Duchess of Cambridge, Kate Middleton.

The Celebrities That Inspire Our Chest Workouts The Most

Perhaps unsurprisingly Arnold Schwarzenegger takes the top spot for chest workouts, the celeb historically known as the master of all chests, providing endless inspiration to his fans for over 30 years. Spanning an enormous 58”, and seeing an impressive 4,400 searches a month for the body part, he truly deserves the title.

Superman and Captain Marvel actors Henry Cavill and Chris Evans completed the top three most searched for chests, pulling in 1,600 and 1,300 monthly searches each respectively for their chest workouts, while the rest of the top 10 was made up of the likes of former footballer and actor Terry Crews, musician Harry Styles and of course, Chris Hemsworth.

The Celebrities That Inspire Our Back Workouts The Most

When it comes to workouts for your back, Arnold Schwarzenegger reigns supreme with 1,900 searches a month by those striving for a back like his own - having been known to advocate extensively that his personalised workouts were essential for developing muscles in the upper back.

Closing out the top five celebrities we look to the most for back workout inspiration is featherweight champion Conor McGregor. The fighter has been on a muscle gaining mission ever since he broke his leg and fell out of action temporarily, and it looks like his hard work has paid off as he’s providing inspiration for many.

Whether you want to bulk up like The Rock, or exude Kardashian-like confidence in your holiday snaps, celebrities can provide inspiration and motivation for your workouts. We hope this research has given you some fitness inspiration to help fuel your own training – you can find several celebrity inspired workouts here.

When embarking on workouts inspired by celebrities, remember that celebrities often have a whole team, and a lot of time, dedicated to getting their physiques, so don’t compare your journey with theirs!

Find hundreds of free workouts to help further your progress on our app, or get in touch to book a session with one of our personal trainers if you’re looking for help developing a plan to achieve your own goals.

Search data was taken from global Google Keyword Planner data for the past 12 months (March 2021 – March 2022) for the following search terms:

The figures for the overall most-searched celebrities were taken by combining the totals for [celebrity name] + workout and [celebrity name] + exercise. The results for each muscle group search term were then ranked in descending order.